Hello, everyone. Emma Martin here. Are you ready for another four-word interview? I’m having such a great time with these characters…well, and the authors, too.

If you’re new to the blog, here’s how it works. I get to ask four questions, but they can only be four words long, and the kicker is…they answers have to be four words or less as well.

Why four? Well…why not? That’s just how I roll.

EM: Fondest childhood memory is . . .
JB: Christmas with my parents

EM: Favorite food to eat . . .
JB: Chocolate. Anything with chocolate

Okay, anyone who digs chocolate that much–my new best friend!! I mean, what’s not to like? Come meet Jenna in Fall With Me. 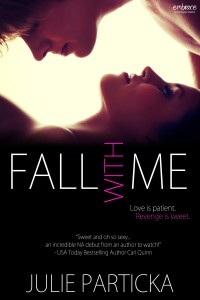 Love is patient. Revenge is sweet.

In the game of love…
Dumped by her college boyfriend for her best friend, the last thing Jenna Brandt needs to deal with is working beside her backstabbing-BFF’s hotter-than-hot brother. But when he offers her a chance to get some revenge on her ex, she can hardly say no–even if spending more time with Sutton puts her heart in jeopardy all over again.

Someone’s going to get hurt…

Sutton Bell has had a thing for Jenna since they were in high school, but after one screwed-up night, she didn’t want anything to do with him. Now, with just the summer before he leaves to begin his new career, Sutton’s determined to convince Jenna he’s not the player he used to be. But saving his sister from making an awful mistake may mean losing Jenna for good.
Amazon | B&N | iTunes | Kobo
~~~~
***Sounds great, doesn’t it?? Though…I like to exact my revenge with a particular dagger buried deep in a Vamp chest…***
~~~~ 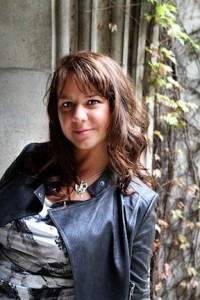 Julie Particka was told to get serious about her future in Junior High. Several years after getting a bachelor’s degree in chemistry, she realized being serious was over-rated and went back to her first love–writing. Now rather than spending her days in the drudgery of the lab or teaching science to high school students, she disappears into worlds of her own creation where monsters sometimes roam, but true love still conquers all.

She can most often be located in the Detroit area with her favorite minions (the ones who know her as Mom) where she is currently hatching a plot for world domination. It involves cookies for everyone, so she’s pretty sure there’s no way it can fail…except the minions keep eating the cookies.
Come find her here:  Website | Facebook
Thanks for stopping by…see you again soon!